Inspirational wines from Family of Twelve

In a room filled with members of New Zealand Sommelier and Wine Professionals and hosted by the illustrious wine estates of the  Family of Twelve, we were presented an impressive line up of Flagship and New Direction Wines. 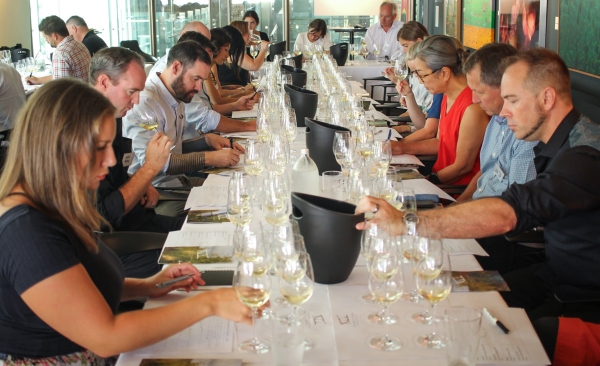 This special event at the ASB Waterfront Theatre provided an opportunity to taste wines specifically selected by the estates to show their flagship, iconic wines along with recent additions to their portfolios which reflect exciting innovation and new directions. 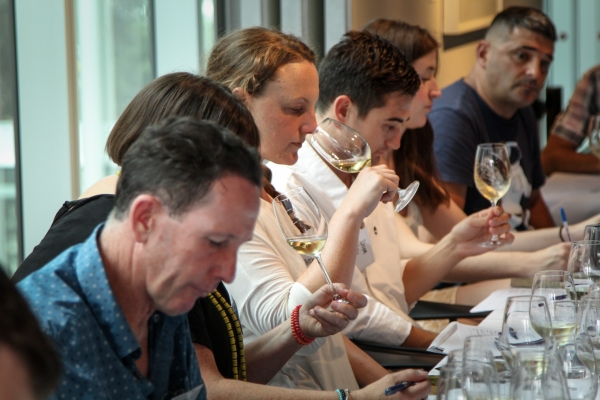 The Family of Twelve are widely acknowledged as including some some of New Zealand’s leading winemakers and wine world personalities. Located through out the country, it is unusual to find them together in one room for a tasting of this type and we are grateful to Karen Fistonich for facilitating this. 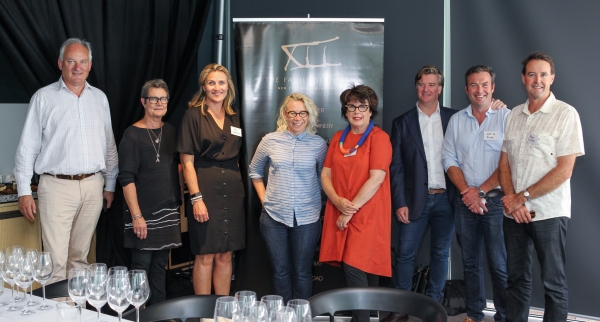 Founded in 2005, the vision of this 12 winery partnership from eight regions is to work together to help build their individual identities while supporting the values of quality, artisan production and to promote education in New Zealand and in their key export markets. 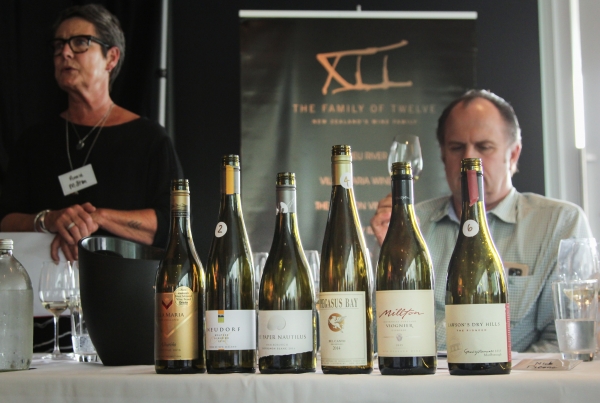 From a distance, one would think that the common offering from these wineries would be sauvignon blanc, given its importance in New Zealand dominating our exports and in 2016, providing over 70% of all production. However, in the tasting, a single Sauvignon Blanc was in the offing. In fact the common thread amongst the group was Chardonnay for the whites and Pinot Noir for the reds.

Nautilus Estate, owned by the Hill-Smith family of Yalumba fame, has now released it's own alternative "sauv". This reflects the growing diversity within the sauvignon blanc styles. The Paper Sauvignon Blanc 2016 is a fantastic addition to this list. Barrel-fermented and then left on its lees, the anticipated herbaceous character has been replaced with more mellow, yeasty tones; a firm acidity that is balanced by ripe peach and guava notes and delicate hints of spice and nutmeg. This is the second vintage of this wine and with 6 months aging in bottle, it has yet to be released.

Neudorf Vineyards was established in 1978 by Tim and Judy Finn in the Moutere Valley located along the coast and northwest of Nelson City. At the tasting, Judy poured the Neudorf Moutere Albariño 2016, reflecting a new direction for them with this leading Spanish white grape. The result is a dry wine with aromas of nectarine and melon, no doubt an influence of the warm Nelson weather, and on the palate refreshing acidity with fresh lime and herbal notes - even cucumber. This is one of the most interesting New Zealand albariños that I have tasted in recent times. The Moutere Pinot Noir 2015 was also presented in the third flight and, along with their chardonnay, represents the essence of Neudorf wines. With mushroom and ripe red plums on the nose, the palate demonstrates the very satisfying combination of firm tannins balanced with good acidity, savoury, spice and cinnamon on the finish.

Lawson’s Dry Hills remains one of the iconic producers of New Zealand gewürztraminer; a grape variety often overlooked. As a food wine, it's valuable to be reminded that Gewurz offers the diner aromas and textures that are hard to replicate in any other wine. The Lawson Dry Hills Gewurztraminer 2015 is redolent of white summer flowers, rose petals, heady lychees and passionfruit with a luxurious, creamy texture and lingering finish. It is an absolute WOW.

The Millton Riverpoint Viognier 2015 offers a full-bodied wine with spice and caramel, nectarines and honey. Pegasus Bay, reknowned for its diversity of rieslings showed the Pegasus Bay Bel Canto Dry Riesling 2014. Full of ripe apricots and honeysuckle, this wine has a firm acidity giving a dry finish. 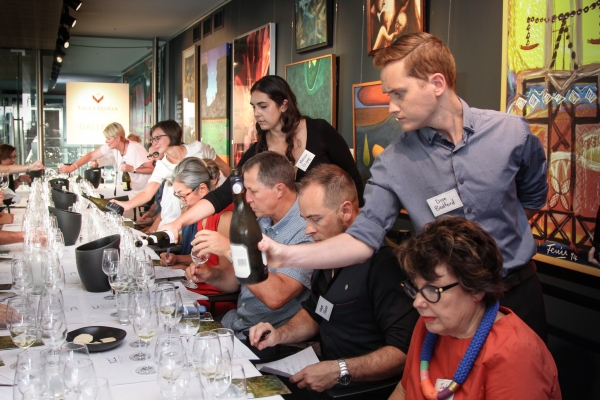 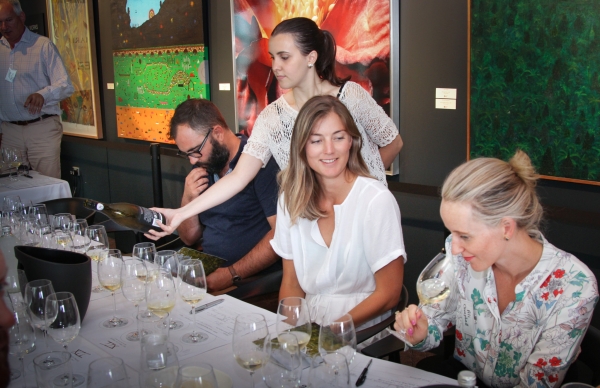 Nick Picone, Chief Winemaker from Villa Maria introduced the second flight of six chardonnays and the diversity of styles was fascinating. Starting with Lawson Dry Hills Reserve 2015 and Nautilus Estate Chardonnay 2015, both of which offer classic ripe fruit with oak influence. The Craggy Range Cape Kidnappers Chardonnay 2015, by contrast was much more restrained in style and at this point in its development, the citrus notes dominate the oak. Villa Maria's flagship Keltern Chardonnay 2015, also from Hawkes Bay provided an excellent example of how chardonnay can be transformed by the wine-making process. With aromas of flint and smoke, toasted hazelnuts and burnt caramel and on the palate ripe grapefruit and golden peach. The Millton Opou Chardonnay 2015 from Gisborne again demonstrated ripe tropical fruits balanced with savoury oak. 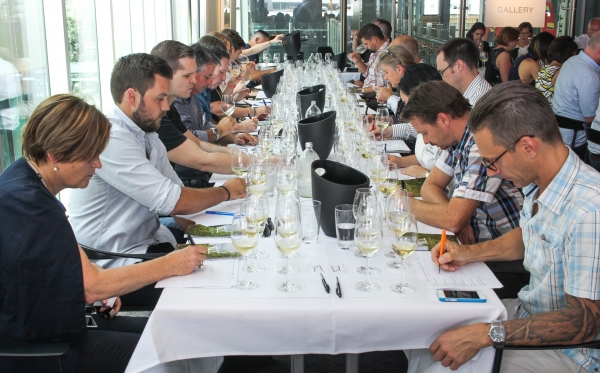 The Brakjovich Family’s Kumeu River Estate have established an international reputation for their chardonnay produced in a number of styles including three different single vineyard wines.  The Kumeu River Estate Chardonnay 2015  is a blend of West Auckland fruit and shows a more elegant style with restrained oak and lemon-lime acidity. Led by Michael Brakjovich MW, the family has been experimenting with methode traditionnelle, a logical decision for a winery specialising in chardonnay. The innovative Kumeu River Crémant from the 2012 vintage is 60% Chardonnay, 40% Pinot Noir. It remains on its lees for 30 months, disgorged by hand at the winery. It has a crisp, dry finish with around 5g residual sugar and sealed with a crown cap. 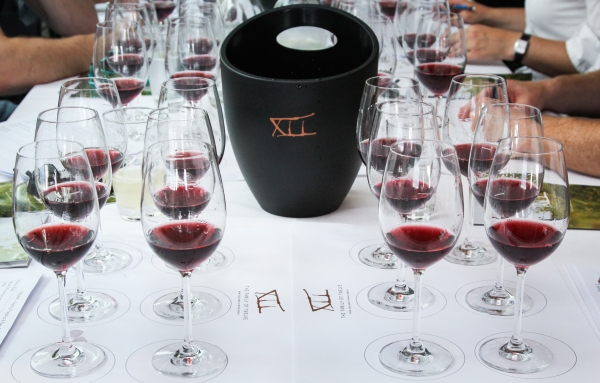 To start this line up with Felton Road Block 3 Pinot Noir 2015  was a real treat. It's dense fruit aromas of ripe strawberries, currents, toasted hazelnuts and caramel from the oak resonated with audience. This flight truly demonstrates the depth and the exceptional quality of New Zealand Pinot Noir and for me this flight was the highlight of the tasting.

Helen Masters, winemaker of Ata Rangi described their 2014 vintage, made from vines that are up to 30 years old, as a wine 'in balance from go'. The layers of red plums and savoury spice interplay delicately with the alcohol and tannin. The Fromm Clayvin Pinot Noir 2015 with more acidity and palate length and the Palliser Estate Pinot Noir 2015 showing ripe fruit and fragrant spice were valuable additions. Pegasus Bay Prima Donna 2012, a wine with more bottle age, helped demonstrate how pinot can adapt and change as it develops and this rounded off an exciting flight. 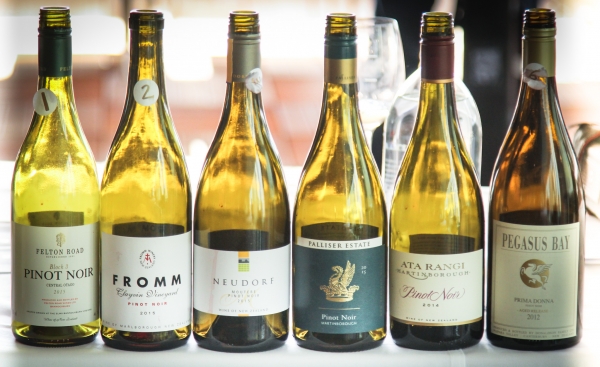 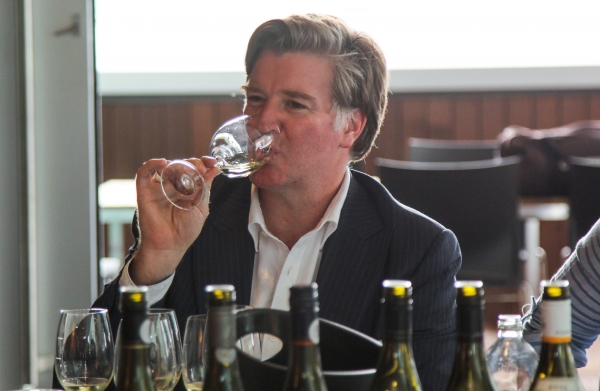 In the last flight, we were treated to a barrel sample of the Palliser Wharekauhau Pinot Noir 2016 showing aromas of summer fruits, strawberries and cherries. Felton Road Calvert Pinot Noir 2016 with a  nose of burnt oak and ripe cherries; Fromm's Cuvée H 2015, named after highly regarded and long- serving winemaker Hätsch Kalberer; Ata Rangi's McCrone Pinot Noir 2014 from a new single vineyard site and to wrap up the afternoon, the Craggy Range Gimblett Gravels Syrah 2015.

All told this was an inspirational tasting that both challenged our senses and convincingly reminded us of the successful evolution of New Zealand wine world. With many thanks to the Family of Twelve. 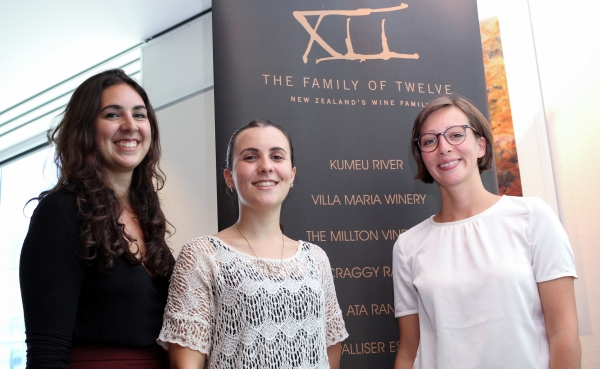 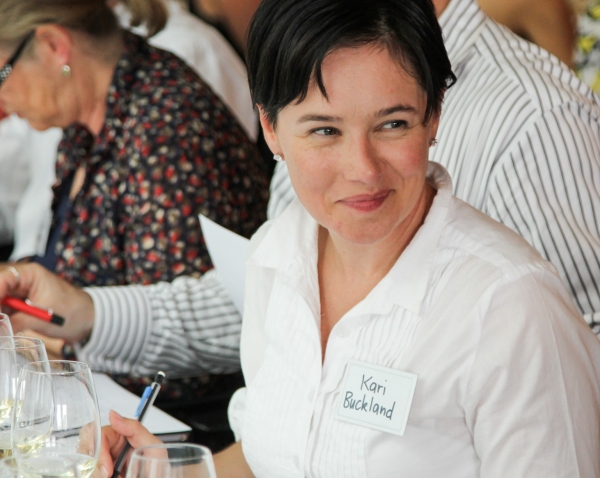 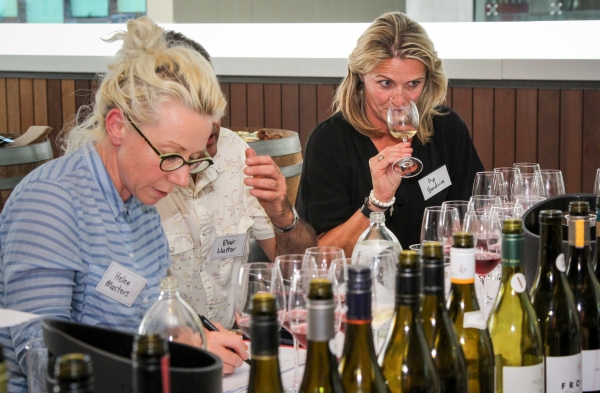 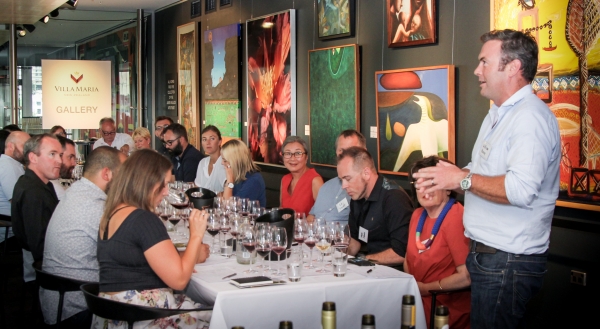