One of the most intriguing aspects of tasting a series of wines from around the greater Auckland region is to contemplate the influence of Auckland’s unique volcanic geology.

Auckland's Volcanic Field consists of at least 48 volcanoes with the Waitemata and Manukau harbours considered ancient rivers, surrounded by dry land, that overtime have been submerged by the sea. Waiheke Island, now important as a wine-growing region, remained above sea level. The numerous small scoria cones, that on average range from 10 to 120 meters in height, contribute a unique and unexplored aspect of Auckland’s wine terroir.

On the final day of our W&F Celebration, we organised an Auckland Wine of Origin Tasting for New Zealand Sommeliers and Wine Professionals and this provided a unique opportunity to explore this notion some more with  Bob Campbell and Michael Brajkovich MW of Kumeu River Winery.

Internationally there has been a surge of interest in wines from volcanic regions: Mount Etna on Sicily, Spain’s Canary Islands, The Azores (Portugal) and specifically the island of Pico, Dundee Hills in Oregon, Mount Vesuvius with the Italian wine region of Taurasi and even the slopes of Mount Fuji in Japan, the wines from the Yamanashi region are celebrated as volcanic wines. In 2016, Master Sommelier, John Szabo published the book Volcanic Wines: Salt, Grit and Power.

Perhaps it is time to re-evaluate the influence of Auckland’s volcanic heritage? 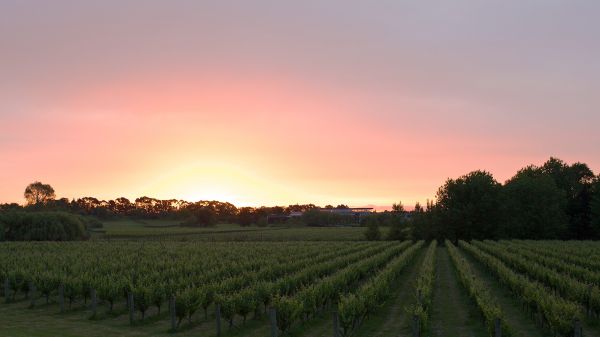 The goal of this tasting was to get a better understanding of the wines and terroirs of Auckland.

This includes creating an increased visibility of Auckland wines and to encourage our local sommelier community to celebrate the local options when serving international visitors, particularly when it comes to wine and food pairing.

So often tourists fail to find an Auckland wine option on the city’s restaurant and café wine lists.

Calling for samples of wine grown exclusively from grapes grown across Auckland, 34 wines were tasted. Chardonnay made up 27% of wines submitted, Cabernet Merlot Bordeaux blends 24%, Pinot Gris 12%, Syrah 9% and the balance of the white wines were from the grapes Viognier, Verdelho and Gewurztraminer. Interestingly there was no Riesling.

There were also two rosés and three vintages of the Italian black grape Montepulciano, from Coopers Creek. 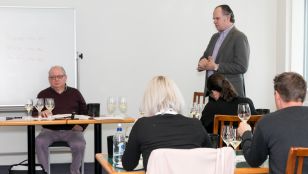 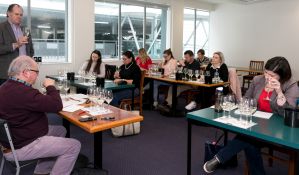 Michael Brajkovich MW drew attention to the particular importance of climate on the Auckland region. He explained that while Auckland was further north than Hawkes Bay, he considered Auckland a cooler region because of the influence of two large bodies of water – the Tasman to the west and the Pacific to the east. This keeps the region cool with fresh sea breezes and high rainfall being a constant feature. When looking at Chardonnay from Auckland, he commented that it is possible to taste a natural acidity of lemons, limes and green apples rather than the more tropical fruit notes (pineapple, melon) typically identified in wines from Gisborne and Hawkes Bay, especially the Gimblett Gravels.

One of the more intriguing aspects of tasting wines from around the greater Auckland region is to consider the influence of Auckland’s unique volcanic geology. Internationally there has been a surge of interest in wines from volcanic regions such as Mt Etna in Sicily and Mt Fuji in Japan.

Bob Campbell MW led the tastings which were conducted over six flights of wine. The highlight in the whites was the range and depth of Chardonnays. Styles included the ripe peach and rock melon from the Passage Rock Reserve Chardonnay 2017 from Waiheke Island to the lean, crisp characteristics of Westbrook and Soljans; to Villa Maria’s Ihumatao Chardonnay 2014 showing notes of baked peach, nectarine and toasted hazelnut with a lingering savoury finish. Kumeu River Hunting Hill Chardonnay 2017 and Estate Chardonnay 2017 were tasted with their winemaker Michael Brajkovich MW.

Waiheke Island dominated the red wines and there was broad appreciation from the group of their exceptional quality. The Bordeaux blends of Destiny Bay’s Destinae 2014, Frenchmans Hill Blood Creek Eight 2013, Te Motu 2013 and Goldie Reserve 2013 are wines which already have some age but will confidently continue to age for another 5 – 10 years. Single varietal wines from Peacock Sky offer a special opportunity to get to know Cabernet Franc or Cabernet Sauvignon without the more common blend of other grapes. For the tasters, it was a pleasure to sample the Puriri Hills Reserve 2009 that confirmed the age-worthy ability of Auckland region wines produced outside Waiheke. 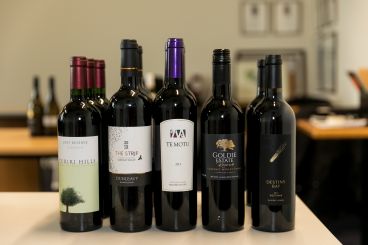 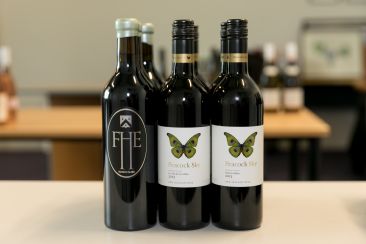 The high quality of Waiheke Syrah from Frenchmans Hill Estate Rock Earth 2013, Passage Rock Syrah Reserve 2013 and Goldie Syrah 2015 also reflects the potential of this style of wine both as a wine for drinking now but also for aging. Cork closures were a common feature of the premium wines.

The Pinot Gris selection was less impressive with Cooper’s Creek Pinot Gris offering the liveliest with most aromatic notes. The two rosé wines, from Brick Bay and Coopers Creek offered up summer berry aromas of cherries and strawberries which make this variety so popular with consumers.

The aromatic wines of Viognier, Gewuztraminer and the Portuguese grape, Verdelho are less well known and Villa Maria’s Ihumatao vineyard, adjacent to Auckland International Airport and the Mount Mangere volcano shows this location can achieve a purity of fruit and aromatics which is world class.

The tasting highlighted the fusion of wine styles and we are still yet to discover all of the wine treasures of this region.

One of our most popular projects for our Level 4 Advanced Cookery students is to design a three-course menu, costed to a budget and then prepared for a friend to savour.