A Tribute to Christchurch's Rebuild

On February 23 2019, after eight years of turmoil, the Christchurch Town Hall reopened to the public. And it looks and feels just the same.

At the opening ceremony, Mayor Lianne Dalziel talked about the difficult and costly decisions around whether to demolish or reinstate the Town Hall buildings. For a number of years, it languished with an uncertain future.

Many of you will know that the New Zealand School of Food and Wine was founded in Christchurch in 1995 and as a family we have deep roots in Canterbury. I was thrilled to attend the re-opening of the Christchurch Town Hall, eight years after the Christchurch earthquakes. This is a significant event in my family as the concept of a town hall was the vision of my grandfather, Sir James Hay. Today the theatre is named after him. -

On February 26 1957 a small group met in Christchurch to investigate how to build a town hall for the city. They formed an incorporated society, the Town Hall Promotion Inc. to raise public funds and to convince the wider community that Christchurch indeed needed a world standard concert hall. This was the vision of my grandfather James Lawrence (JL) Hay and who involved my father, Hamish Hay from the outset. Both served as president and chair of the various Town Hall committees.

For my family, the fundraising period, the excitement of the construction period, the opening of this magnificent building and later smaller construction projects, and moving on to building of the Park Royal Hotel, and later the connecting air bridge were just a regular part of our family conversations.

On February 22 2011, the Town Hall, like so many buildings in Christchurch, suffered serious damage in series of devastating earthquakes. 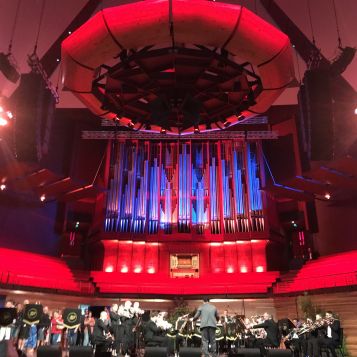 The renovated Auditorium with the Woolston Brass Band performing. 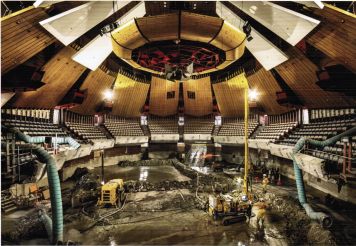 2016 Post card given out by the Christchurch City Council to commemorate the re-opening. Here you can see the drilling down of 8 meter jet grout columns to strengthen the foundations following the earthquake damage.

Today, you only need to walk inside the main foyer to sense the collective joy and relief that the Christchurch Town Hall is back in action. It looks and feels fresh and equally impressive and contemporary. It is a statement of Christchurch’s role as New Zealand’s second city. 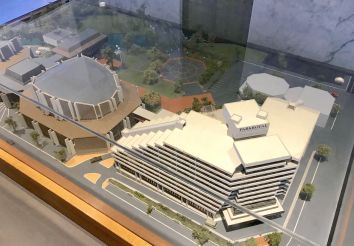 Model of the Town Hall complex with the addition of the hotel that opened in 1987. The Park Royal Hotel was rebranded as the Crowne Plaza and subsequently demolished after the earthquake in 2011. The land now forms part of Victoria Square. Looking behind towards Victoria Square. 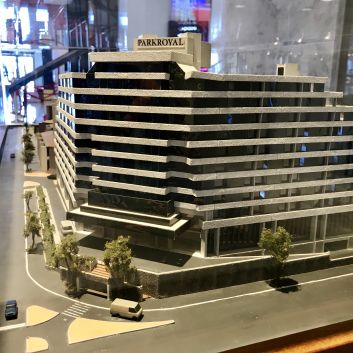 Model of the Park Royal Hotel. later rebranded as the Crowne Plaza. It was opened in 1987 and demolished after the Christchurch earthquakes of 2011. 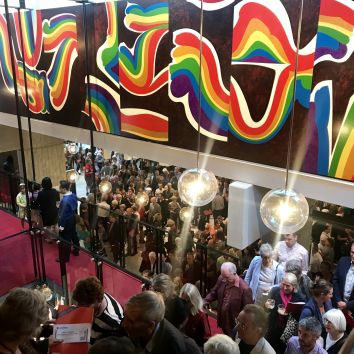 The Pat Hanly mural that dominates the main entrance to the Town Hall. With the globe lights that were specially designed for the building. Crowds ascend the stairs towards the Auditorium for the opening concert of the CSO Christchurch Symphony Orchestra. 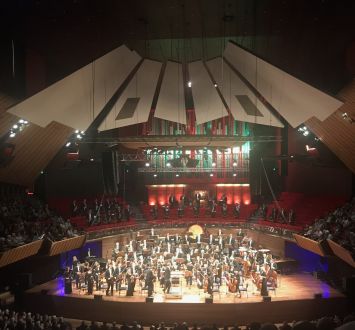 The finale for the opening concert of the CSO Christchurch Symphony Orchestra on March 2nd. Here they play Respigni's Pines of Rome with members of the Woolston Brass in the choir stools. The fourth movement is an anthem of victory which started with the song of the bellbird. (nightingale in the original and finished with a resounding fanfare and standing ovation. 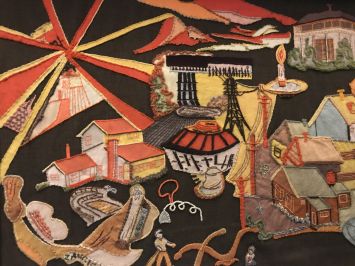 A panel of the tapestry stitched by local Canterbury embroiders to celebrate the history of our region. This is located in the conference room of the Christchurch Town Hall. 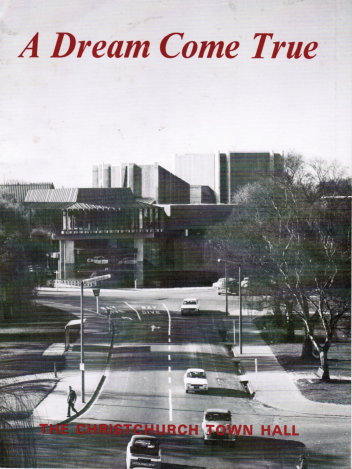 This booklet was prepared by the Town Hall organising committee to celebrate the opening in 1972. It details the 15 years from concept to completion and the enormous community effort that went into building a world class concert venue for Christchurch.
The booklet was sold for 95c as a fundraiser for the organ fund. 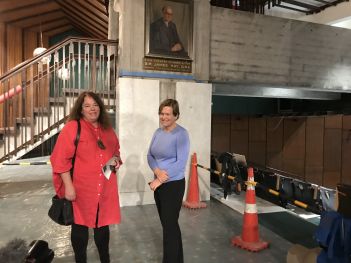 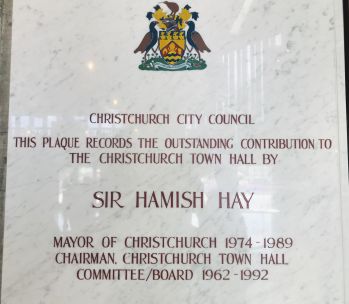 Plaque in main entrance to the Town Hall in recognition of my father, Hamish. 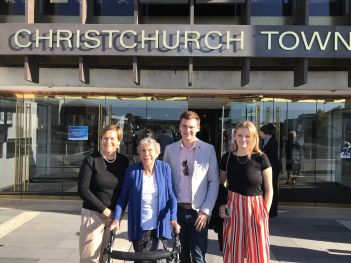 At the entrance to the Christchurch Town Hall, Celia Hay (writer) with June Hay of the Pigeon Bay Hay family, Oliver Hay and Alice Hay.

Prior to the Town Hall opening, the biggest venue for concerts was the King Edward Barracks. It could seat 4500 people and in 1963 hosted a concert for the Queen when she visited.

Please click on the links below to hear the recordings.

1969 Ceremony for laying the Foundation Stone

Opening remarks by Councillor Hamish Hay on behalf of the Town Hall committee. He refers to the history of previous town halls and the funding of this project.Councillor D.B. Rich, chairman of the Waimairi County Council speaks on behalf of the outlying districts which have contributed to the building.

Sir James Hay, President of Town Hall Promotions Society, speaks and hands over a cheque for $75,000 to the Mayor A.R. Guthrey.Mayor Guthrey speaks about the city's growing reputation as a cultural centre and tells listeners no expense has been spared on the town hall which will last for 100 years and be enjoyed by many future generations.

The Governor-General Sir Arthur Porritt makes a speech and lays the foundation stone. Commentary as the stone is laid. Reverend W.A. Pyatt reads a prayer and blessing for the new Town Hall. https://www.ngataonga.org.nz/collections/catalogue/catalogue-item?record_id=796953

1972 Excerpts from Opening Ceremony of the Christchurch Town Hall

Mayor of Christchurch Mr N.G. Pickering welcomes the Governor-General Sir Denis Blundell and speaks about the project. Councillor Clutha Mackenzie speaks on behalf of the regional Canterbury local bodies who have contributed to the Town Hall.

Councillor H.G. Hay of the Town Hall Committee speaks. He notes it is the first town hall the city has had in over 100 years and reads from cables from well-known conductors, composers and musicians: John Hopkins, Sir William Walton and Yehudi Menhuin, commenting on their happiness at the new facility and remembering performances in the Civic Theatre and King Edward Barracks. The Cathedral Choristers perform "The Echo Yodel" (Traditional)

Prime Minister Rt. Hon. J. M. Marshall speaks and congratulates the people of Christchurch on the new building.Rt. Hon. Norman Kirk, Leader of the Opposition, speaks about the importance of the building for the people of Canterbury, calling it a historic milestone.

Governor-General Sir Denis Blundell speaks, noting this is his first official function after arriving back in New Zealand four days ago to take up the role of Governor-General. He says he and his wife are still getting used to their new roles. He congratulates Councillor Hay on fulfilling the vision of his father (Sir James Hay). The National song "God Defend New Zealand" is sung ending the broadcast. https://www.ngataonga.org.nz/collections/catalogue/catalogue-item?record_id=796966