Driving around the narrow, windy roads through the bush-clad Tuscan hills it is easy to see why there is a proliferation of communes and villages, with romantic Italian names, that designate a particular wine style and terroir. What surprised me is the extent of the forests and that vineyards pop up from time to time and are often surrounded by bush – this is no monoculture. The red grape, Sangiovese is the king of Tuscan wines

For wine drinkers, it’s easy to be confused about the difference between Chianti and the smaller region of Chianti Classico. 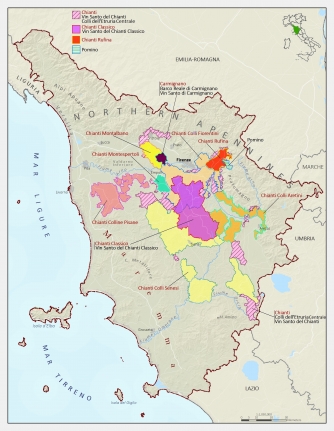 Both hold the designation of DOCG Denominazione di Origine Controllata e Garantita that recognises the highest quality level of Italian wines. The DOCG was introduced in 1963 however wines from Chianti can trace their origin to Etruscan times.

Historically the Chianti region was first designated as a wine region in 1716 and the villages of Castellina, Radda, and Gaiole and later Greve were recognised. Today, Chianti Classico DOCG embraces this historic centre and gained independent DOCG status in1996. It currently has around 7000 hectares of vines. The black rooster emblem on their labels can easily identify Chianti Classico wines.

Wines that bear the name of Chianti DOCG are drawn from the 15,000 hectares of vines grown in the hills south and east of Florence and inland from the Tuscan coast. In the 1930s, the Chianti zone was increased to take advantage of the Chianti brand and a number of sub-zones were allowed to add the Chianti name to their labels. These sub-zones include Chianti Colli Fiorentini, located south of the city of Florence; Chianti Rufina to the north east of Florence and the largest sub-zone of Chianti Colli Senesi located south in the hills around Siena. Chianti Colli Senesi also includes within its zone the highly regarded DOCGs of Brunello di Montalcino and Vino Nobile di Montepulciano.

Another intriguing fact about Chianti wines is that the DOC and DOCG rules allowed the white grapes of Trebbiano and Malvasia to be included in the red blend of grapes dominated by Sangiovese. Chianti wine is often described as a medium-bodied red wine with flavours of sour cherries, violets, tomato vine with a tangy acidity. 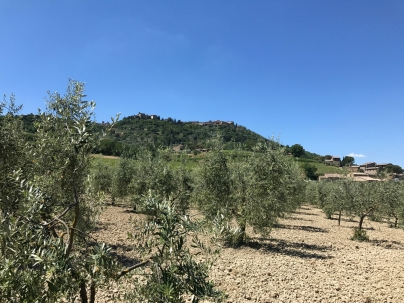 Looking up through the olive trees to the hill of Montalcino

Emergence of the Super Tuscan wines 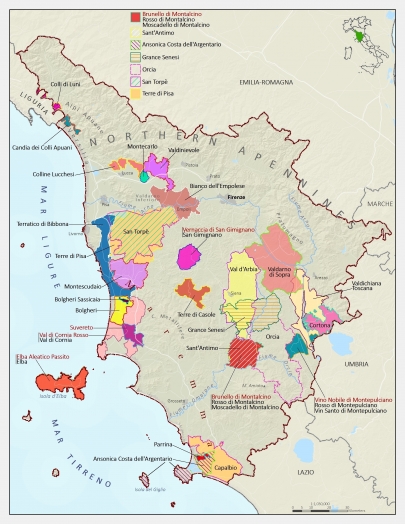 Since the 1970s many winemakers have sought to make wines with less acidity by leaving the red grapes to ripen longer, abandoning the inclusion of white grapes and in many cases adding in the French grapes of Cabernet Sauvignon, Merlot and Cabernet Franc.  The French grapes are easy to ripen easily in the hot Tuscan sun and add body and structure to the Sangiovese.

In this Tuscan struggle to improve quality and update winemaking practices, the so-called “Super Tuscans” arrived. However the innovators were breaking

the law by producing wines using illegal French grapes that were not sanction under the Italian wine laws. The first wine to come on the market was Tenuta San Guido’s Sassicaia, a Cabernet predominant blend that was released in 1968 from grapes sourced from their large farm in Bolgheri. Tignanello, another cabernet blend produced by the Antinori family from their Chianti Classico estate, followed this wine in 1971.  In terms of Italian wine laws, these wines were initially classified as Vino da Tavola – table wines and lowest category.

However with a stroke of good fortune and the marketing skill of Marchese Piero Antinori, there soon emerged a supportive international clientele for these wines and they became known as the Super Tuscans. Other wines followed including Antinori Solaia in 1978 and from Bolgheri, Lodovico Antinori established vines to produce Ornellaia in 1985 and later Masetto – a 100% Merlot wine. Prior to 1994, Bolgheri was a DOC for white wines and rosés but with the rise in popularity of the Super Tuscans, the DOC rules were changed to recognise this. In 2013, Sassicaia was awarded its own DOC and today remains the only Italian estate to holds its own appellation. 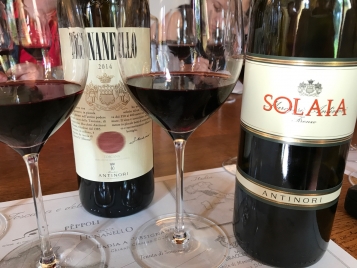 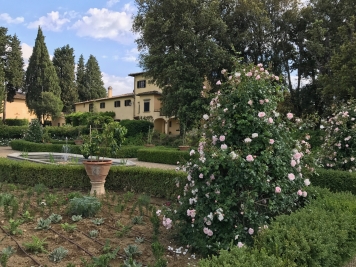 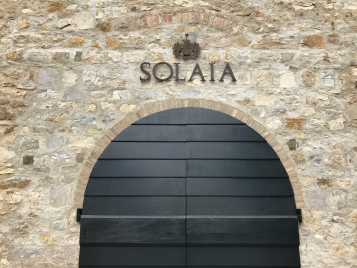 Tenuta Tignanello is also the home of the Solaia, the famous wine made with over 75% Cabernet Merlot.

In 1996, the wine law changed, allowing up to 20% of French grapes to be added to Chianti wines and the prohibition of white grapes in the Chianti blend. Today, there is a new focus on Sangiovese. With new clones and more stringent vineyard practice, Sangiovese is making wines of concentration and a distinct ability to age.

For instance the leading wines of Fontodi are now 100% Sangiovese for their Chianti Classico and flagship, Flaccianello and so is the Brunello di Montalcino from Il Marroneto.  Bigger and bolder wines for the future. 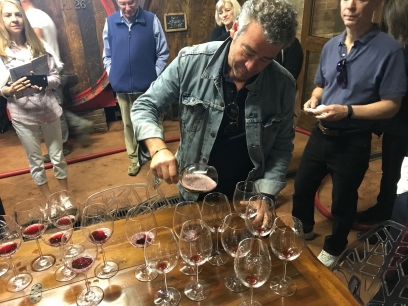 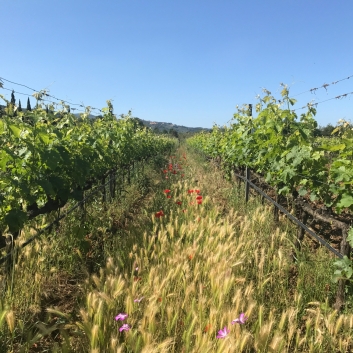 Ca’Marcanda, the Tuscan estate of the Piedmont’s legendary winemaker Angelo Gaja. The highlight was the detailed explanation of the vineyard from pruning techniques to the importance of cover crops.

Tenuta dell’Ornellaia is famous for its Cabernet Sauvignon dominated blends. Founded by the brother of Piero Antinori, Marchese Lodovico Antinori started to plant vines in 1981.

He then went on to develop the iconic wine Masetto,  100% Merlot based wine drawn from a 7 hectare vineyard that can be clearly seen from the Ornellaia vineyards.

The estate is now owned by the Frescobaldi Family. Today, Ornellaia remains a blend of the Bordeaux varieties of Cabernet Sauvignon, Merlot, Cabernet Franc & Petit Verdot. 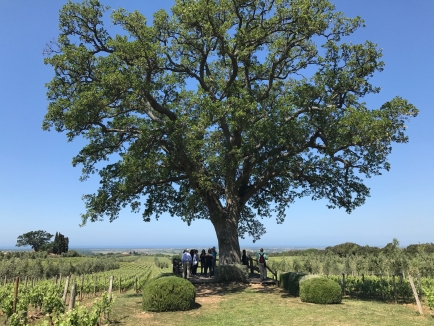 The name Ornellaia takes its inspiration from ‘Fraxinus Ornus’, the Latin name for the Manna or Flowering Ash (in Italian, Orniello), the tree which has given its name to the Ornellaia. Here were are standing beneath the ash and looking out towards the Tuscan coast, eight kilometres away. 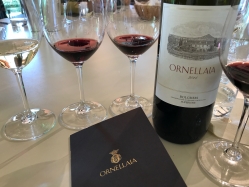 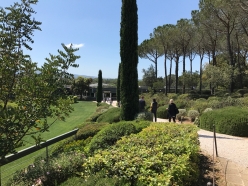 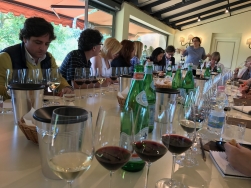 Tuscany is a fantastic place to visit and we you have more knowledge about the local wines, as well as the cuisine, the trip is so much more interesting. Follow these links for more detailed information on Chianti Classico.

My tour started in Pisa where the group of around 15 wine lovers met Jane Hunt, a Master of Wine who lives part of the year in Italy and has been involved in wine tours for many years. The tour manager was Mauro Businaro who also runs wine tours in the Veneto Region.

The Wine Scholar Guild provides comprehensive study and certification programmes on the wines and wine regions of France, Italy and Spain and we currently teach the French Wine Scholar programme at the New Zealand School of Food and Wine.

For more information on upcoming wine tours, please click to the website of the Wine Scholar Guild.